Bologna Ducati Factory and Museum Tour – “I had a dream……”

Bologna in Northern Italy is not only one of the most beautiful cities I have ever seen, but is also home to the ORIGINAL and PRESENT DUCATI FACTORY.

I’m going to give you a real “been-there-done-that” kinda insight into what I can only describe as a dream come true.

Bologna – Home to Ducati, Maserati, Lamborghini and of course, Spaghetti Bolognese..does it get any better? 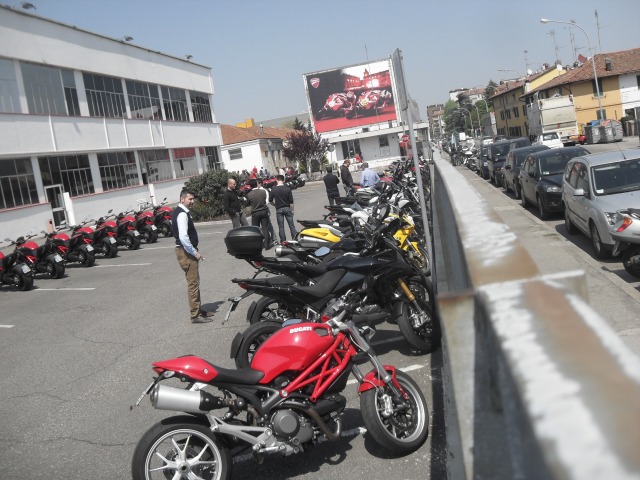 First of all, I’d like to set the scene, it was a beautiful spring day in Venice and we woke up early to check out of our hotel. I’d spent the night squatting mosquitoes and chasing cockroaches, a stonking way to finish off a romantic night in the city of love. I didn’t care though, that our room was crawling with Italian mafia bugs or that my girlfriend and I were leaving this amazing city, because my mind was on one thing and one thing only. I had pre-booked (you cannot merely turn-up) a guided tour around the Ducati Factory and Museum in Bologna and we were on our way. A very scenic two hour train ride later and we were in Bologna. 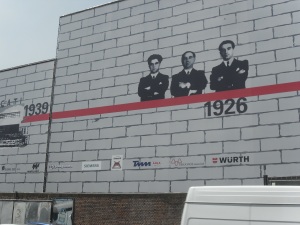 As soon as we stepped off the train I had this amazing feeling, the kinda feeling you get when you go home after being away for a while. It was warm, and I don’t just mean the weather. The soft pastel colours of the buildings relaxed me and I instantly fell in love with the place. Bologna is clearly not a huge tourist destination and it made such a nice change to be in an authentic Italian/European city, where life doesn’t revolve around parting tourists with their money. Bologna is known as a university town and Bologna University, which was  founded in 1088, is said to be the oldest university in Europe, if not the world. Bologna certainly has a young studenty vibe about it, but not in a chavy-British-let’s-get-messy kinda way, the students in Bologna are laid back and elegant, it is Italy after all.

As well as a strong student culture, Bologna has a strong industrial sector, due largely to it’s location and developed transport links. Bologna is not only home to Ducati, but Malaguti Motorcycles, Lamborghini and Maserati, I really can’t think why I love the place so much, I really can’t.

When you book a Ducati Factory and Museum Tour, via the www.Ducati.com website, you are sent an email, which confirms your time and gives you directions on how to get to the Ducati Factory. First, I would like to say that although the instructions are mighty specific, they give the impression the Ducati Factory is miles away from Bologna city center. In reality, it’s only a 5 minute train ride from Bologna central train station (buy your ticket for the “urban train” from the little tobacco stall, not from the ticket machines or ticket office as I thought…gosh, what was I thinking!!!) followed by a ten minute walk, don’t bother taking the bus or paying for a taxi as they suggest, once you get off the train, just walk along the road, it’s dead straight and you’ll eventually get to a street called “Via Antonio Cavalieri Ducati”, it’s impossible to get lost.

So, the Ducati Factory…..I don’t know what I imagined but I was ready to explode with excitement. Along via Ducati, you immediately see a giant “Ducati-time-line” which shows the development of Ducati through the years, pinned up on the external walls of the factory. We reached the front gates where the car park was full of Ducati bikes. Only as I write this have I realized they must’ve belonged to the staff, apparently they get 30% off bikes although they only get that once a year. Ducati Monsters, Ducati Multistradas, Hypermotards, you name it, they were there, as well as a long-long line of brand new Ducati Diavels. Our tour guide told us they were there for journalists and dealers who were to be taken out on a test ride later, lucky buggers!

The staff swan around in their emblematic red Ducati jumpers and they even have Ducati jeans, it really does give you the feeling you are somewhere very special, clearly very proud to be working at THE Ducati Factory. Our tour guide came to meet us, she was young and female, not that I had a problem with that, it just wasn’t what I expected. I would say she was about 30 years old and she spoke English with that “welcome-a to-a the Ducati-a motorcycle-a factoryyyy-a, I-a am-a your guideeeee-a”.

You start by being told you aren’t allowed to take photos in the Ducati Factory, it is after all THE Ducati factory, it’s not a mock up or anything. We were constantly dodging forklift trucks and being told to “please-a be-a careful-a!”. What struck me was the “normality” of everything, it’s bright and clean but not the biggest factory I’ve ever seen.

It really had that family business feel to it, just so happens that it’s Ducati. There were guys and girls on the conveyor belts, bolting pieces of Ducati Monster parts together, you can’t help but be reminded of Frankenstein. The tour guide fills you in on the details, explains the “supermarket” idea that they use, all the parts for each bike are located in one area, the guys can grab what they want as and when they need it. The staff are young and it was funny to see the lack of “novelty ” in their eyes. They live and breathe Ducati and I couldn’t help thinking they didn’t seem grateful enough, still, apart from the blokes checking out my girlfriend and hollering things at her, I didn’t hear a word from any of them so I really shouldn’t make assumptions about how they feel about working for Ducati and as for their unashamed perving on my girl, well I guess I can’t blame them, she is proper stonking!!

SO, WHATA’ YA LEARN? 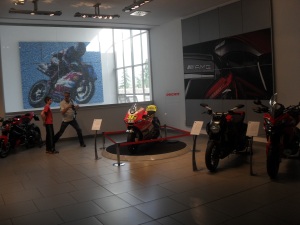 DUCATI FACTORY & MUSEUM TOUR – IS IT WORTH IT?

There is no way in the world any Ducati fan could go to Bologna and not take a trip to the Ducati Factory, especially for €10 per person. It really gives you a feel for what’s happening behind the scenes and I totally recommend it. I would however, like to say a few things to Mr Ducati boss man…….

This entry was posted in QN Stuff, Uncategorized. Bookmark the permalink.