Triumph Speed Triple 2011 – “The Daddy of all Naked Sportsters”

Naked sports bikes are a relatively new style of motorcycle. Growing up, I remember thinking there was two types of bikes (yes, it was a sheltered upbringing), head down sports bikes such as the Honda Fireblade or chunky chopper bikes like Harley Davidson style. 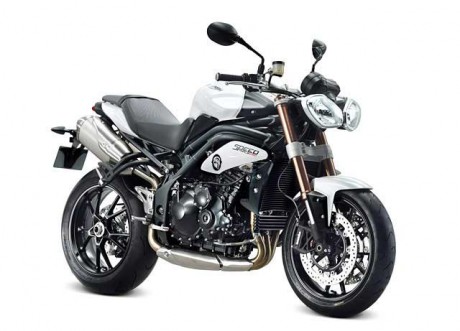 In the early 90’s, a few bikes made huge advancements in the naked sports bike arena and it’s not hard to see that the Triumph Speed Triple was one of the first bikes that did it well. Stripping the bike naked, but not losing the sports styling. The single swing arm, the crazy-bug-eye twin headlamps, the stumpy rear end and the twin exhausts mounted either side of the seat. It basically invented what you and I now think of as the “Streetfighter motorcycle”.

The whole idea of the naked sports bike is some what of a oxymoron.  You take a super duper fast sports bike, take off a load of stuff (normally stuff which makes it go fast), shift the pegs around and the bars so it’s more comfortable (and slower) and detune the engine so it’s……not so fast. When you think about it, it’s a wonder anybody ever bought one.

“It’s not all that comfortable, and it’s not as fast as our super bikes, but it costs almost the same amount of money…..roll up, roll up!”

The Triumph Speed Triple was that bike for me. After years dreaming of passing the motorcycle test and buying a Suzuki GSXR 1000000, I discovered the 2005 Triumph Speed Triple. It was as if I had been dreaming about getting hold of Pamela Anderson and then realising that in reality,  I would prefer somebody more like Jennifer Aniston, just that little bit softer, more forgiving.

So anyway, back to the bikes. The 2011 Triumph Speed Triple is some what of an animal, and is definitely more sports than naked. The most powerful Speed Triple ever made, 1050cc, in-line three cylinder engine which although doesn’t have that Ducati Monster Grunting sound, is still wompingly powerful.

Triumph have really upped their game with regards to technology and have done themselves proud with this beautiful naked sports bike, and I have no doubt that we will be seeing crazed streetfighters ripping up the streets all over the country very soon!